Ballet Minnesota is thrilled to be welcoming renowned principals Dusty Button and Rasta Thomas, performing as the Sugar Plum Fairy and her Cavalier in our 30th Anniversary production of the Classic Nutcracker! 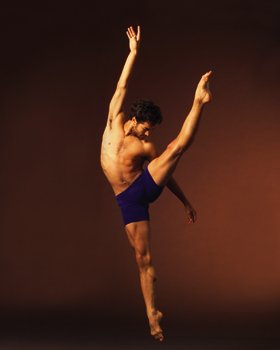 RASTA THOMAS studied martial arts before training in ballet at the Kirov Academy. Theater: Movin’ Out on Broadway (dir. Twyla Tharp), Carmen (dir. Rob Ashford), and Soul Possessed (dir. Debbie Allen). Film and television: Ted 2, One Last Dance with Patrick Swayze, So You Think You Can Dance, Never Stand Still, In Performance at the White House, and the Academy Awards. Featured principal with over 25 companies, including American Ballet Theatre, the Kirov Ballet and the legendary Dance Theatre of Harlem.

DUSTY BUTTON was born in South Carolina and began her dance training at the age of 7. At age 16, she moved to New York City to train at the Jacqueline Kennedy Onassis School at American Ballet Theatre. In 2007, Button joined American Ballet Theatre’s second company, ABT II, were she performed the lead role in Adam Hougland’s Vanished. She completed her training with London’s Royal Ballet School on scholarship, graduating with honors and was presented with the Dame Ninette de Valois bursary. While at The Royal Ballet School she performed lead roles in David Bintley’s Gallantries and Natalie Weir’s Unwritten at the Royal Opera House. She also performed with The Royal Ballet in Sylvia and The Sleeping Beauty. Button was awarded the bronze medal at the Youth American Grand Prix in 2006.

In 2008, Button was invited to join Birmingham Royal Ballet where she performed principal roles in many ballets including David Bintley’s Cinderella (Skinny, the evil stepsister) and Gallantries; Sir Peter Wright’s The Sleeping Beauty  (Temperament Fairy); Twyla Tharp’s In the Upper Room  (Stomper); Kenneth MacMillan’s Concerto (3rd Movement); Hans van Manen’s Grosse Fugue; and the lead role in The Centre and it’s Opposite created for her by Gary Stewart.

Button has been featured in Glamour Magazine, PointeMagazine, Dance Europe, Dance Spirit Magazine, Dance Magazine, Dance Informa and many others.  Button was featured on the 2015 Pointe Magazine cover where she was labeled as “A New Brand of Ballerina”. Pointe also remarks, “onstage, Dusty defies categorization.”

She has turned the page to the most exciting chapter of her career becoming Red Bull’s first ballet athlete . She has been a guest performer with companies around the world including American Ballet Theatre, Japan’s K Ballet, The Mongolian National Ballet, The Ace Awards, Broadway Underground, Alvin Ailey American Dance Theater, Space Coast Ballet and Ballet Hawaii. She has choreographed works for Birmingham Royal Ballet and Boston Ballet’s BB@home series, as well as for various companies and organizations in San Francisco, Los Angeles, Boston, New York, and London.

As Button has only begun to make her mark be sure to keep your eyes open while following along with this star in her inspiring journey of success.